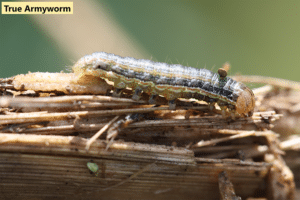 Armyworms may feed on seedling corn, in whorls, and on kernels within the ear. Feeding from smaller armyworm larvae can result in “window-paning” of the upper side of leaves, while large larvae can chew large, irregular holes in leaves. Both fall and true armyworm have four pairs of abdominal prolegs.

In corn, fall armyworms are typically brown colored and striped caterpillars with a characteristic inverted “Y” on a dark head capsule. They commonly infest the whorls of late planted non-Bt corn, and later in the season, will feed within the ears, similar to corn earworm.

Mature true armyworm larvae are smooth, almost without any hairs, greenish-brown to reddish-brown, with a dark stripe along each side. A broad dorsal stripe runs down the length of the back. This species differs from the fall armyworm by having a dark lateral band on the outer portion of each proleg. They are sometimes seen feeding on corn during the seedling stage. Infestations are often associated with grassy field edges or where cover crops contained wheat, oat, barley, or cereal rye. They seldom cause economic loss.

Sampling: During the whorl stage, scout fields for the presence of feeding (defoliation). Examine whorls with signs of leaf feeding. Other caterpillars may also be found in the whorls (e.g., European and southwestern corn borer). Fall armyworm egg masses are usually laid on the undersides of leaves. Moths lay their eggs in clusters of 50 to several hundred on corn leaves and other vegetation.

Seedling plants. Treat when 50 percent of the plants have one or more larvae per plant.

Whorl stage or larger plants. Controls should be initiated when 75 percent of whorls have larvae present. Control of larvae in ears is not economically practical in field corn. 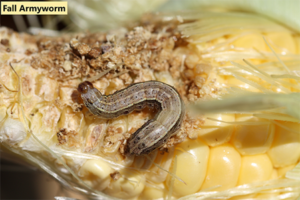 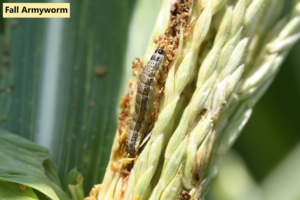 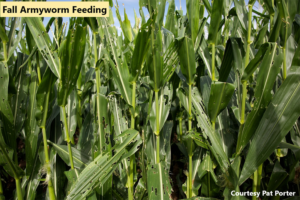 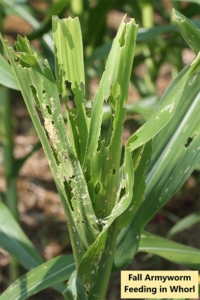 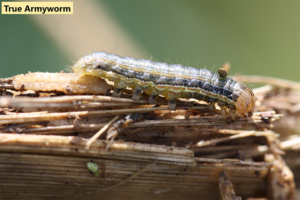