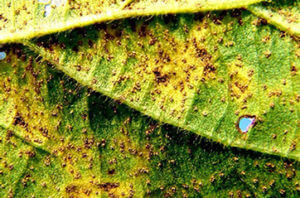 Soybean rust (SBR) is caused by the fungus Phakopsora phachyrhizi. Similar to other rusts, it can only survive on living tissue for any substantial amount of time. Hence the fungus overwinter in the southeastern U.S. and each year spores have to travel into the upper Midsouth for infection to occur. SBR symptoms can closely resemble those of other diseases such as Septoria brown spot, bacterial pustule, etc. but differences can be seen with a 30x hand lens or dissecting microscope. Raised pimple-like structures called uredinia or pustules (resemble small volcanoes) develop in angular lesions, mostly on the underside of leaves, and release spores through a central opening that is circular which can be diagnostic. In contrast, Septoria brown spot lesions will be flat and bacterial pustule will have irregular, cracked openings. Symptoms of SBR first appear on leaves in the center and lower canopy. 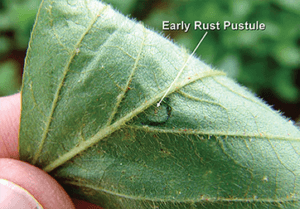 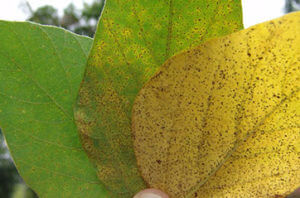