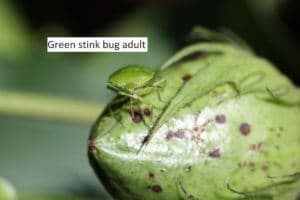 Stink bugs are a common pest of cotton in Tennessee. The green stink bug is the most common species observed, but the brown stink bug, dusky brown stink bug, and others may also be found.  Stink bugs are primarily seed feeders and migrate into cotton from wild hosts or other crops when bolls begin to develop. Infestation may occur first on field edges. Both adult and immature stink bugs will feed on bolls, and injury may reduce lint production in one or more locks, reduce fiber quality, and damaged bolls may rot because of secondary infection by plant pathogens. For more information visit the Cotton Insects Stink Bugs Fact Sheet (W027).

Scouting specifically for stink bugs is suggested once bolls are present. Stink bugs prefer bolls between 7-21 days in age. External signs of feeding injury include the appearance of circular black lesions on the surface of bolls (i.e., “catfacing”). These sunken lesions are typically about 1/16th of an inch in diameter. The lint of bolls may be stained, seed may be destroyed, and feeding warts may be observed on the internal surface of the boll wall. Stink bugs can be scouted for visually, but most thresholds are based on drop cloth samples or the occurrence of internal symptoms of feeding damage to bolls.

Drop cloth – Also called a beat sheet or ground cloth, is a preferred method of sampling stink bugs. The cloth is typically 2.5-3 feet in length. In at least 4-6 locations in a field, shake plants from two rows over the drop cloth and record the number of adults and nymphs. Record the number of stink bugs per drop cloth or per feet of row sampled.

Boll damage – Examine 25 thumb sized bolls in 4 locations in each field, and record the number of bolls with internal signs of stink bug feeding (stained lint)

Treat when infestations exceed an average of 1 or more stink bugs per drop cloth (5-6 row feet). Treatment is also recommended if 20 percent or more of 12-16 day old (thumb-sized) bolls have internal feeding warts and/or stained lint. Because stink bug infestations may co-occur with plant bug infestations, a rule of thumb is to count stink bugs as equivalent to 3 tarnished plant bugs when determining if treatment thresholds have been exceeded for a complex of stink bugs and plant bugs. 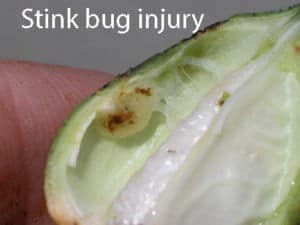 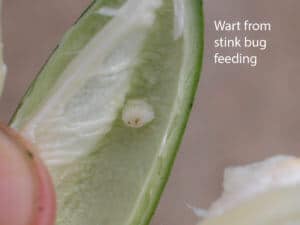 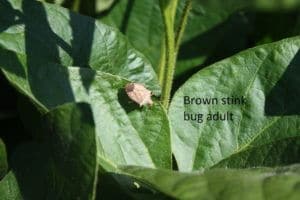 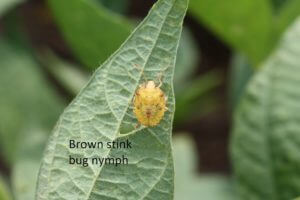 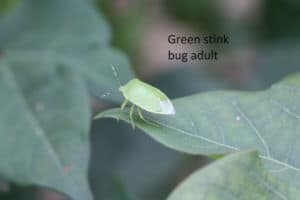 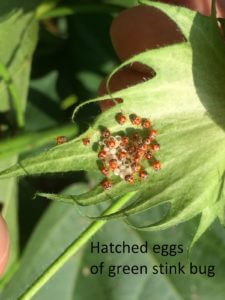 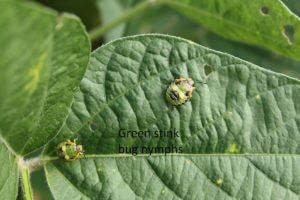 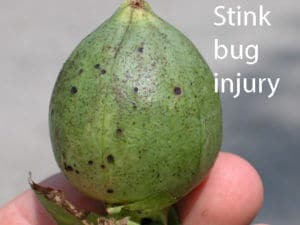 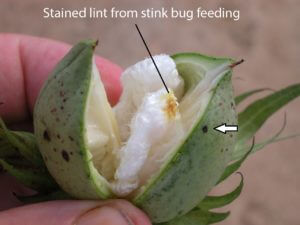 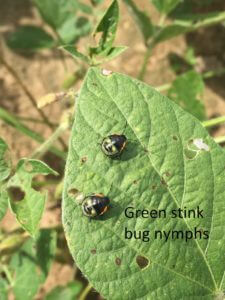 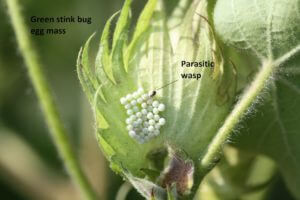 * Most pyrethroid insecticides are labeled and effectively control green and southern green stink bugs. Bifenthrin is the only pyrethroid recommended if brown stink bugs are present in significant numbers.