Most insect pests that attack corn at or below the soil surface are most damaging to seedling corn. Planting corn early can reduce the chances of insect infestations and injury. Controlling soil insects that threaten corn stands and seedling health is important for corn production. Factors such as reduced tillage, no-till corn, and fields with a history of soil insects justify the use of insecticides or insecticide seed treatments at planting. These products are used as prevention, because when there is high potential for infestation rescue treatments offer less control.

Adult Southern Corn Rootworms are also called the twelve-spotted cucumber beetle and have a wide host range. Females lay eggs at the base of corn plants or alternate weed hosts and, after hatching, larvae feed on roots, leading to wilting or lodging (known as “goose necking”) or plant death. The larvae have three pairs of legs just behind the head. Larvae are up to 1/2 inch long with brownish patches on the head and tail end.

The Seedcorn Maggot is the larval stage of a fly that feeds on decaying organic matter in the soil. Larvae are less than 1/4 inch, pale white, and lack legs or an obvious head. Seedcorn maggots feed on germinating corn seed planted in cool, wet weather or when corn is planted into fields with freshly decaying vegetation.

Wireworms are the larval stage of click beetles. Larvae are usually brown, elongated and slender and may take between 2 and 5 years to mature, depending on the species. Control is often difficult in fields that were fallow or pasture before corn. Wireworms feed on the seed and roots and bore into the underground part of the corn seedling, which can lead to wilting, deadheart, or plant death.

White Grubs are the larvae of scarab beetles (e.g., May and June beetles), and some species feed on the roots of seedling corn plants. Grubs are C-shaped and white to cream in color.

Cutworms are the larvae of several species of moths which spend much of their time below ground, typically venturing out at night to feed above ground on the stems and leaves of plants. Additional information about the management of cutworms is provided on the cutworm page.

Sampling: There are no standardized sampling methods for most below-ground pests of seedling corn. Because foliar-applied insecticides are generally ineffective, sampling is often done to evaluate the health of seedling plants, determine the cause of weak or dying plants, and to determine if re-planting is needed. The symptoms of below-ground insect feeding are often similar, regardless of which insect caused the injury. Plants may be stunted, leaning or lodged, leaves may have white or yellow streaking, and if severe, affected plants may wilt and die.

To check for the presence of wireworms, bait stations of untreated seed (e.g., 1 cup mixture of corn and wheat) can be buried a few inches deep prior to planting. Several bait stations should be used in a field and checked after 7-10 days. An average of one or more wireworms per station suggests in-furrow insecticides or an insecticide seed treatment should be used. 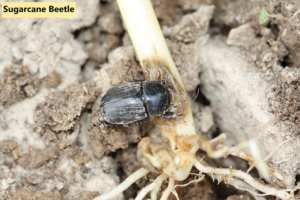 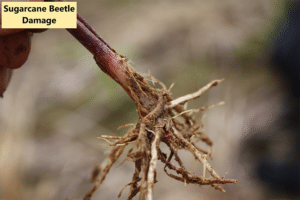 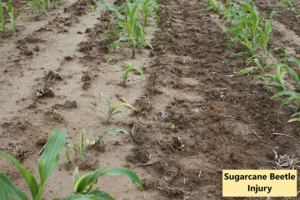 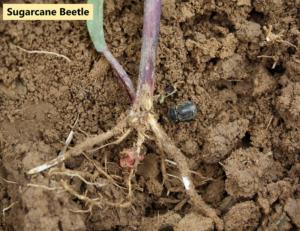 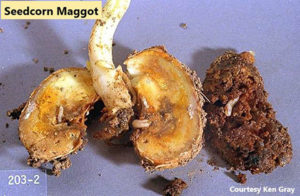 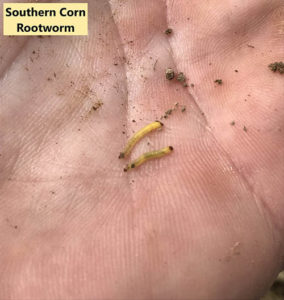 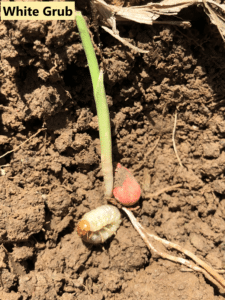 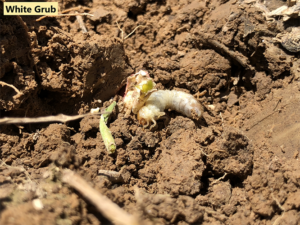 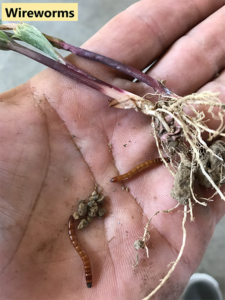 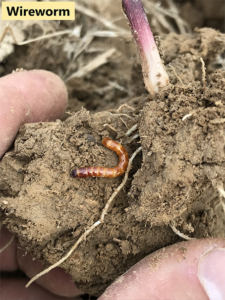 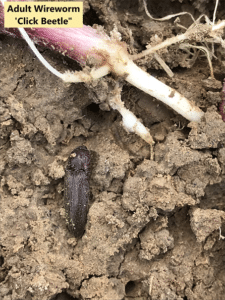 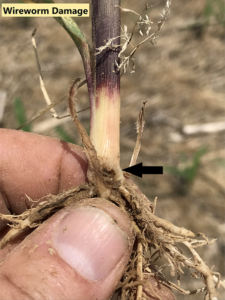 E = excellent, G = good, F = fair, P = poor or no activity, ? = insufficient data to provide confident ranking, NL = pest not listed on label. Some ratings are based on incomplete data and are only meant to provide a general guideline of relative efficacy to the best knowledge of the author. Parts of this table are courtesy of Auburn University‘s corn insect, disease, nematode, and weed control recommendations for 2017

* Formulated product may also include fungicidal and/or nematicidal ingredients that are not listed.

** Efficacy of seed treatments on sugarcane beetle is dependent upon the timing of infestation. Expect less control if infestations occur several weeks after emergence.

Examples of At-Planting Treatments for Seed and Seedling Insect Pests

See the insecticide label for specific use instructions.

* Caution: When using organophosphate insecticides such as Aztec or Counter with herbicides such as Accent, Callisto, Capreno, Halex GT, Steadfast, Option or Resolve, the possibility for plant injury exists. See herbicide label for restrictions.

** Many other pyrethroid insecticides are labeled for at-planting control of cutworms and some other pests. These include Asana XL, Baythroid XL, Declare, Mustang Max and Pounce. Please see their labels for specific use instructions.