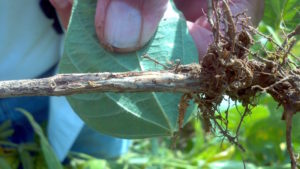 Charcoal Rot
Photo Credit: Heather KellyCharcoal rot is caused by the soil borne fungus Macrophomina phaseolina. Above ground symptoms appear during reproductive growth stages which include small leaflets and loss of vigor, which can turn yellow, wilt, and eventually die but remain attached to the petioles (similar to stem canker). Infected plants may mature earlier and develop small, black microsclerotia in the vascular elements which may be so numerous that they resemble a sprinkling of finely powdered charcoal, causing a grayish-to-black discoloration of the tissues beneath the epidermis on the lower stem and taproot and often in the pith of the stem. Black streaks in the woody portion of the crown may also be produced. Fields with lighter, droughty soils will be more severely affected especially during dry years. Yield can be severely reduced due to fewer and smaller seed.