There are several other caterpillars found in soybean that may cause some level of defoliation, although it is very rare for these species to cause economic damage in Tennessee. However, a brief description is included below because these insects may be encountered.

Velvetbean Caterpillar: This insect is common in the coastal regions of the South. In Tennessee, it is sometimes found late in the growing season on late maturing soybeans, especially after one or more particularly mild winters. The larvae grow larger than most other caterpillars found in soybean and can cause substantial defoliation when present in large numbers. Color varies considerably, but when found in Tennessee, the larvae are typically green in color. Small larvae loop in an inch-worm fashion similar to green cloverworm or loopers, but velvetbean caterpillars have four pairs of prolegs. Similar to the green cloverworm, the larvae wiggle rapidly when prodded. This behavior helps to distinguish them from corn earworm with which they are sometimes confused. More complete information about this pest can be found at https://edis.ifas.ufl.edu/pdffiles/IN/IN30800.pdf.

Silver-Spotted Skipper: Scouts will sometimes encounter this unusual looking caterpillar in soybean. The caterpillars are easily recognized by a dark, often maroon-colored head with yellow-orange eyespots, and by having a narrow ‘neck’ and relatively fleshy, thick green body. Larvae feed on leaves which may be loosely woven together with silk.

Painted Lady: The larvae of this butterfly will feed on soybean leaves, sometimes occurring in groups. Similar to silver-spotted skippers, the caterpillars will web leaflets together while feeding. Their color varies, and they are sometimes confused with the saltmarsh caterpillar because the larvae are hairy, although typically with shorter, stouter, and less dense ‘hairs’ (giving them a more spiny appearance). More complete information about this insect can be found at https://webdoc.agsci.colostate.edu/hempinsects/PDFs/Painted%20lady.pdf 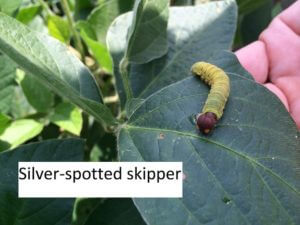 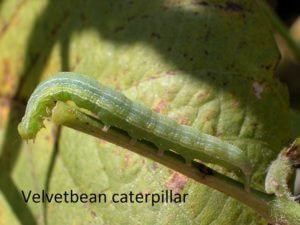 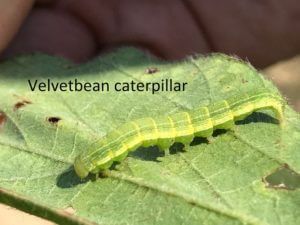