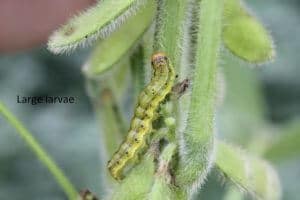 Caterpillars (larvae) of the corn earworm, also called the bollworm or podworm, may cause occasional but serious damage to soybean by feeding on flowers and pods. Some leaf feeding may also be observed but is rarely a concern. Large caterpillars may be green, brown or yellow, with light and dark stripes running the length of the body, and they also have sparse setae (hairs) on their bodies. Larvae reach a length of 1.5 inches and have four pairs of prolegs and a pale brown or orange head.

Focus sampling for corn earworm beginning at flowering (R1), and pay special attention to late maturing fields. Moth catches in pheromone traps can indicate times when scouting for corn earworm should be intensified. Take 25 sweeps with a sweep net and count the number of larvae that are found at 4 locations. Increase the number of sampling sites in large fields (> 50 acres). Also document what other pests are present and may be contributing to pod feeding, such as fall armyworm.

Treatment for corn earworm is most likely when plants are blooming and through the early pod development period (R5). Treatment is generally not recommended prior to flowering. The suggested treatment threshold, based on sweep-net sampling, is shown in the table below. To determine the treatment level, estimate the potential value of the crop and the cost of the insecticide application. For example – if the crop value is $8/bushel and the cost of control is $14/acre, including application costs, the sweep-net threshold would be an average of 8.6 larvae per 25 sweeps. 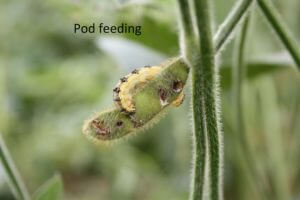 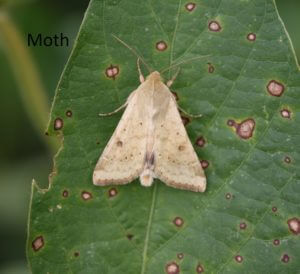 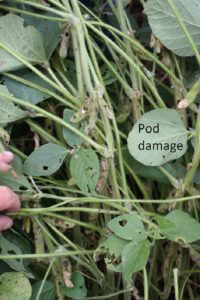 ** NPV virus (Heligen) will only control corn earworm. Applications should be made when larvae are small. Do not apply if most larvae are large or if infestations are well above treatment threshold.