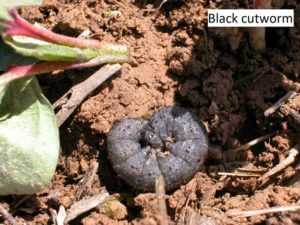 One or more species of cutworms may be pests of soybean by cutting seedling plants and potentially reducing stand density. However, economically damaging infestations in soybean are relatively rare compared with cotton or corn. The caterpillars have four pairs of prolegs, are brown to dark grey in color, and are generally hidden below ground during the day. During the night, small larvae may chew holes in leaves. However, larger larvae may cut small plants and pull plant parts partly underneath the soil. Symptoms of injury are cut stems or wilted plants. Leaf petioles may also be cut. Cutworm damage is more frequent in reduced tillage systems and following a legume cover crop. Cutworms may become established on existing vegetation and move to emerging soybeans once this vegetation has been killed. Destroying all green vegetation at least 21 days prior to planting reduces the likelihood of cutworm damage.

Check fields until the plants are about 10-12 inches tall. Look for insects that may be on the plant (threecornered alfalfa hopper) or in the soil around the base of the plants, such as cutworms or lesser corn stalk borer. Cutworms can often be dug up by recently damaged or adjacent plants. Evaluate stand loss (percentage of dead or dying plants) and estimate if stand loss will exceed acceptable levels.

Treatment for cutworm infestations in soybean is based on their potential to reduce stand density below acceptable levels. Generally, infestation expected to cause more than 10% stand loss should be treated with insecticide. 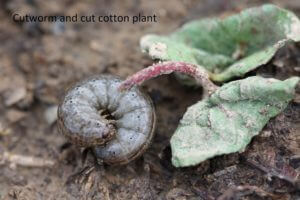