Slugs (and Snails) in Corn, Soybean and Cotton

Home/Soybean/Soybean Insect Guide/Slugs (and Snails) in Corn, Soybean and Cotton 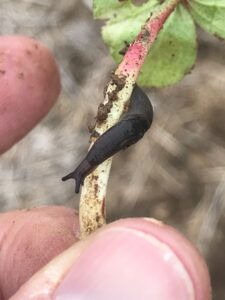 Slugs and snails are not insects but are mollusks, and more specifically, gastropods. Instead of legs, they have a muscular foot that secretes mucus, which creates a “slime trail” as they crawl across the soil or plant. They both have two pairs of retractable tentacles on their head.

Snails have a shell, and they rarely cause economic damage. In Tennessee, most of the snails found in row crops do not feed on plants, even though they are often found on plants during the day.

Slugs do not have a shell and often cause economic damage. The marsh slug, Deroceras laeve, is a common species found in Tennessee. Slugs feed mostly at night but sometimes can be seen in the early morning hours on cloudy, wet days. Slugs take shelter in the soil or under plant residue during the day. Economically damaging infestations almost exclusively occur in low or no-till production systems, especially where a lot of plant residue is present. Thus, infestations are often worse in fields following corn, sorghum, or after a wheat cover crop. Infestations are also usually higher in wet areas of the field. Slug damage to seedling plants can be substantial when the seed furrow is not entirely closed during planting, which typically occurs when planting conditions are wet. An open seed furrow gives slugs access to feed on emerging seedlings during the day or night. When infestations are severe, stem feeding may result in “cut plants”. Replanting may be necessary when severe infestations are present.

Unexplained, irregularly shaped holes in the leaves are an indication of slug feeding. In corn, this feeding sometimes appears as etching of the leaves of seedling plants. The worst injury is often seen where plant residue covers emerging seedlings, allowing the slugs to feed in a sheltered environment during daylight hours. If sampling during the day, look under debris and dig into the soil several inches deep using a garden trowel, particularly around the base of plants and where there are cracks and crevices, to visually confirm the presence of slugs. Their shiny slime trails are also a good hint that slugs are present. If sampling at night, use a flashlight to find slugs on the plants or the soil surface.

Baiting is also a good way to check for the presence of slugs.  For example, a small can filled with beer or beer-soaked oatmeal will attract slugs. Place the baits late in the day and check for slugs early the following morning. The presence of many slugs on baits shortly before planting is a sign of potential problems. Laying a shingle over beer-soaked oatmeal is a trick to find slugs taking harborage under the shingle during the day.

Although both snails and slugs are often present in the same field, it is almost always slugs that cause a problem. Management is sometimes needed when slugs are numerous and causing stand loss. There is no set treatment threshold for slugs in corn, cotton or soybean as their impact depends as much on planting and emergence conditions as it does the number of slugs present.  However, seeing many slugs or the presence of multiple slugs at bait stations near the time of planting is an indicator of potential economic damage. 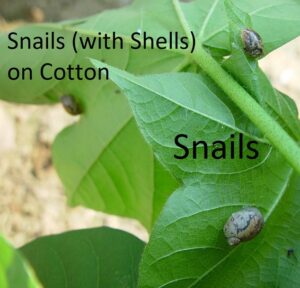 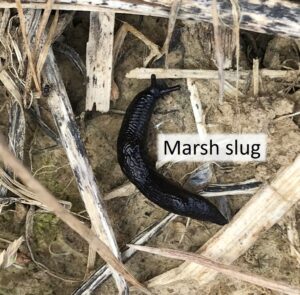 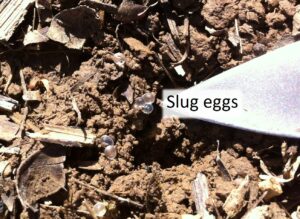 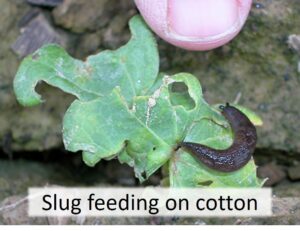 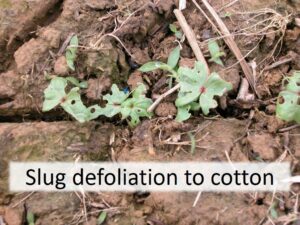 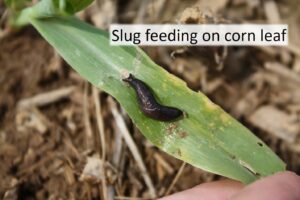 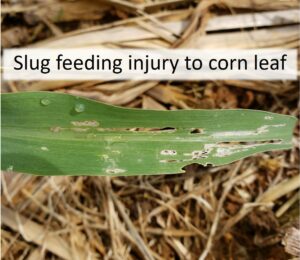 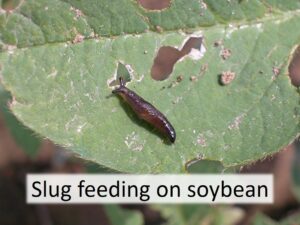 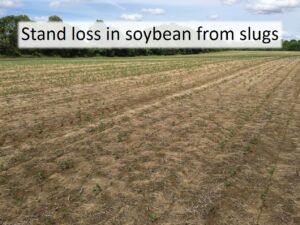 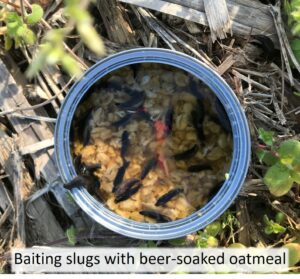 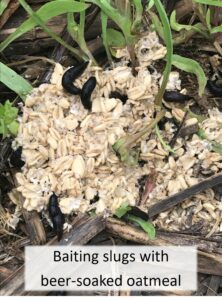 Slug problems can be managed proactively with light tillage, where this is an option. Avoid planting during wet conditions to ensure the seed furrow closes. Seedling plants can tolerate a substantial amount of defoliation, and it is stand loss that usually causes economic damage. The chances that slugs will significantly reduce yield drops considerably if seedlings emerge quickly, so planting in cool soils increases the likelihood of economic losses. If row cleaners are used, setting them to move plant residue away from the seed furrow can reduce the severity of the damage. Another suggestion is to increase seeding rates when slugs are present at planting to compensate for anticipated stand loss.

Insecticides do not control slugs. In fact, they may worsen the problem by reducing populations of slug predators such as ground beetles. Some data suggests that insecticide seed treatments may have the same effect, as slugs are unaffected, but predators may be killed by eating slugs that have ingested seedling plant tissues. Avoiding the use of insecticide seed treatments is an option, particularly in soybean. However, data in Tennessee indicates that seed treatments provide value in controlling insect pests in soybean, especially in cases where some legume cover crops are used (e.g., vetch, Austrian winter pea).

Granular baits such as metaldehyde (e.g., Deadline M-Ps™) or iron phosphate (e.g., Sluggo™) provide effective control of slugs if used in a timely fashion. These products are relatively expensive and need to be spread like dry fertilizer but at low rates (e.g., 10 lbs/acre). Therefore, it will require some forethought to determine how to make the best application and be sure that bait of choice is available at the quantities needed. Thus, sampling several days in advance of planting is a critical step.