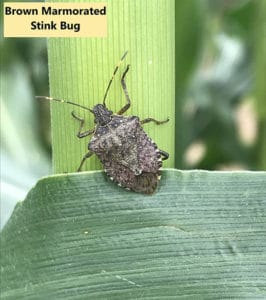 Several species of stink bugs can occasionally be pests of corn in Tennessee. Stink bugs can damage the growing point of small plants resulting in irregular growth or even death. Feeding on small developing ears (1/2 to 3/4 inches long) prior to silking may also result in malformed or aborted ears.

Sampling: In seedling corn, check twice weekly for stink bugs and other seedling corn pests. Walk in a zigzag pattern through the field, checking at least six places in a field. Count the number of stink bugs and damaged plants in ten feet of row. Check at least 100 plants.

Just prior to tassel emergence, corn fields should be checked for the presence of stink bugs. Walk in a U-shaped pattern over the field. Visually examine 10 plants in 10 locations of a field. Infestations are likely to be worse on field margins.

Seedling plants. Treat corn less than 24 inches tall if 10 percent or more of plants are infested with stink bugs.

Late Whorl stage. Treat corn if 10 percent or more of plants are infested with stink bugs at or shortly before ear shoots appear (about V15). Treating for stink bugs is generally not recommended once silking has begun. 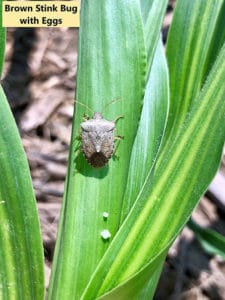 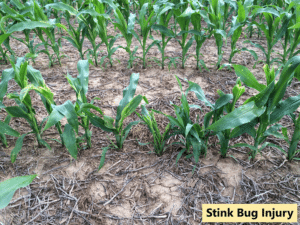