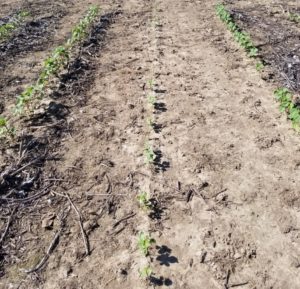 –Pythium spp.:  Pythium spp. can cause a seed rot that will prevent germination of cotton seeds, and can also cause tan discoloration in the roots. When the roots are infected with Pythium, they are often described as being “water soaked”, and they may exhibit lesions. Initial stunting of seedling development usually occurs before post-emergence damping off.

–Fusarium spp.: Although Fusarium infection alone is not responsible for damping off, it does contribute to this disease. Fusarium spp. cause an overall failure to thrive, and they tend infect the seedling after the infections of other soil borne pathogens such as Thielaviopsis basicola,, Rhizoctonia solani, and Pythium spp. Post-emergence wilting of the seedling is sometimes observable before damping off occurs.

–Rhizoctonia solani: The most common symptoms of R. solani infection is post-emergence damping off. However, in cases where damping-off does not occur. R. solani can cause lesions that will girdle the plant. The latter is referred to as “sore shin”.

Yield Loss Estimate:   Pythium spp., Fusarium spp., and Rhizoctonia solani are 3 of 4 cotton seedling pathogens known to cause cotton yield losses in Tennessee. Often, there is not just one disease that is causing the yield loss.  Therefore, when totaling yield losses due to cotton seedling disease, all 4 pathogens are considered. In 2018 alone, it is estimated that 162,000 bales of cotton were lost to seedling disease in the United States.  This is the equivalence of 48.6 million dollars lost. Table 1 demonstrates where seedling disease has ranked over the past 5 years for disease loss estimates in cotton across the U.S.

In Tennessee, cotton seedling diseases can be great cause of concern. Together, these diseases compose the biggest disease problem Tennessee cotton producers encounter during a growing season. Since 1995, seedling diseases have caused from 3%-22% within the state. Yield losses were typically higher in years with cool and wet conditions present early on in the season.

Note: When post-emergence damping off occurs, it is often difficult to tell exactly which pathogen has caused it. When considering management options for the next growing season, make sure to consider management practices that would control for more than one pathogen.

Cultural Practices: The spores of Pythium spp. are able to swim through water stored in soil particles to infect seeds and seedlings, and they are able to germinate in cool conditions. Therefore, it is important that the soil is not extremely saturated at the time of planting. In addition to maintain an adequate soil moisture content, growers should delay planting dates until the soil temperature reaches a minimum of 60°F.

Seed Treatments:  Seed treatments are the first line of defense when combating seedling diseases. When buying seed look for high quality seed that has a base fungicide treatment applied. For control of multiple pathogens, search for treatments that contain the active ingredients: Myclobutanil, Metalaxyl, Protioconazol, and Penflufen. 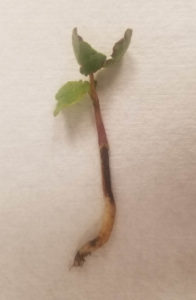