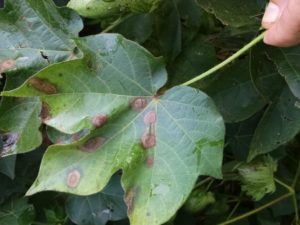 Foliar Symptoms: Characteristic symptoms of Target Spot include brown lesions, sometimes approaching 2 cm (~1 inch) in diameter, exhibiting a series of concentric rings. Un-like Stemphylium and Alternaria Leaf Spot, the spots are typically not bordered by a dark band. Leaf spots and premature defoliation are generally confined to the interior canopy (unlike that found in Stemphylium and Alternaria diseases.)

Diagnostic Note: Target Spot can be quickly differentiated from Stemphylium Leaf Spot by location in the canopy. Also, defoliation from Target Spot typically begins at the bottom of the plant and progresses upwards. Lesions may occur on the upper canopy, but defoliation of the upper 20% has not been observed.

Range and Yield Loss: Target Spot has become progressively more wide-spread in the Southeast and Mid-South regions of the Cotton Belt, but is most severe in Florida, Alabama and Georgia. In severe cases, yield losses exceeding 200 lbs lint/A have been documented.

Management of Target Spot with fungicides is made difficult by the dense canopy which obstructs placement of fungicides in the interior of the canopy. Greatest success in managing Target Spot has been achieved by applying fungicides during the 3rd and 5th weeks of bloom. 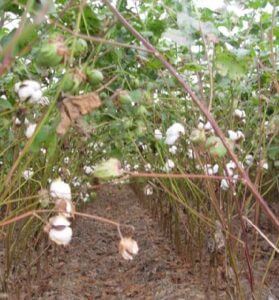