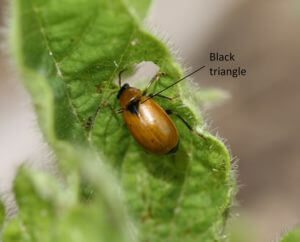 The bean leaf beetle is almost always present in soybean fields and sometimes causes economic injury. Adults are about 1/4 inch (6 mm) in length and sometimes have pairs of black spots on their wings. The color of adult beetles varies, but they are usually reddish, yellowish, or tannish. A key identifying characteristic of bean leaf beetles is a rear-facing black triangle on the top of the wings just behind the thorax. Eggs are laid on the soil surface and larvae are found in the soil, where they cause little injury and are rarely seen.

Adult bean leaf beetles damage soybean plants by chewing holes in leaves and may occasionally feed on pods. Holes in leaves are roughly spherical in shape. In very rare cases, heavy feeding by first generation beetles on seedling plants can lead to stand loss. However, most economic damage is caused by defoliation of larger soybeans from later generations. Bean leaf beetle is also a vector of bean pod mottle virus. Soybean plants infected with bean pod mottle virus can show a variety of symptoms from chlorotic leaf mottling, puckering, and necrosis. This virus may also cause harvest problems as it may cause “green stem syndrome”, a disorder where the soybean stem stays green even after the plant has matured, making harvest more difficult. Although there is potential for economic loss from bean pod mottle virus, it is rarely a major concern in Tennessee. For more information visit the Soybean Insects Common Defoliating Beetles Fact Sheet (W392).

In an average sized field, take 25 sweeps with a sweep net and count the number of beetles that are found at 4 locations. Increase the number of sampling sites in large fields (> 50 acres). Also, visually estimate percent defoliation at each sampling point. It is important to document what other pests are present and may also be contributing to defoliation.

Treat at 30% defoliation until bloom (R1), 20% from bloom to full seed (R1-R6), and 30% after R6 to R6 plus 7-10 days. Alternatively, insecticide treatment can be made when infestations average 2 bean leaf beetles per sweep (50/25 sweeps), but this is generally not suggested unless defoliation is already near the threshold level.

Insecticide seed treatments such as Cruiser, Gaucho, and NipsIt Inside provide protection to small seedlings and can help prevent the spread of bean pod mottle virus. 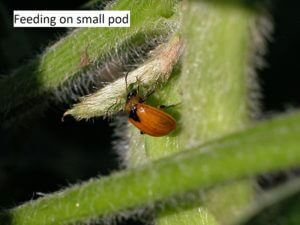 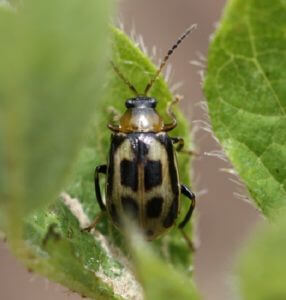 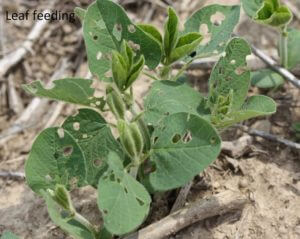 * Control with pyrethroid insecticides may vary because of resistance in some populations of bean leaf beetles. This appears more common in the western region of the state, and particularly in the area near the Mississippi River Delta. Tank mixing acephate (0.5 lb active ingredient) with a pyrethroid insecticide will improve control.