Spodoptera spp. including the fall, beet and yellowstriped armyworm are often found in soybean, although they only occasionally cause economic damage. All three species feed on foliage. The fall and beet armyworm, in particular, may also feed on pods. Armyworms lay their eggs in a mass that is covered with tan (fall and yellowstriped) or white (beet) scales from the moth’s body. The caterpillars (larvae) vary in color but generally lack obvious setae (hairs) on the body. All species are approximately 1.5 inches long when fully grown and have 4 pairs of prolegs.

Fall armyworm is a multicolored, striped caterpillar. They often have a prominent, light-colored inverted “Y” on a dark-colored head, but the head of this species is often lighter in color when it occurs on soybean, in pastures, or on weedy grasses. Armyworms may feed on leaves, stems, and pods. Economically damaging infestations are most common in late maturing fields. Serious damage is sometimes seen when larvae occur on weedy grasses within the field and move onto soybean when the grasses are consumed or removed with an herbicide application. Infestations may also be worse along field edges where grasses are present.

Beet armyworm larvae are generally green in color, and the small larvae feed in clusters of 10-30 individuals, often skeletonizing the undersides of leaves. Larger larvae are less aggregated and may feed on leaves, flowers, and pods. They have a small black dot on either side of the body above the second pair of true legs. Beet armyworm larvae are often found on plants near Palmer pigweeds, a preferred host of this species. Thus, infestations may be worse in fields where this weed is common. Beet armyworm infestations can be worsened by the previous use of insecticides that disrupt populations of beneficial insects. Infestations also tend to be worse in fields with wider rows or skimpy stands, and particularly during hot and dry summers.

Yellowstriped armyworm is rarely a pest, and when treatment is needed, it is almost always on seedling plants where larvae may cause excessive defoliation. Larvae are typically dark in color with a prominent yellow stripe running the length of its body on either side. They usually have an obvious dark spot on either side of the body on the body segment behind the last pair of true legs. The thorax, where the true legs are located, of smaller larvae tends to be slightly wider than the rest of the body (giving it a barrel chested appearance). Larvae sometimes feed on flowers or small pods. However, treatment is rarely if ever needed once blooming has begun.

In an average sized field, take 25 sweeps with a sweep net and count the number and kinds of larvae that are found at 4 locations. Increase the number of sampling sites in large fields (> 50 acres). Also, visually estimate percent defoliation at each sampling point and evaluate if and how much pod feeding is occurring. It is important to document what other pests are present and may also be contributing to defoliation or pod feeding. 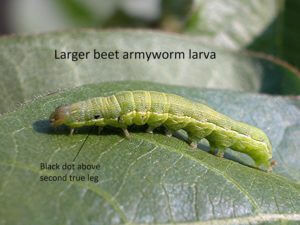 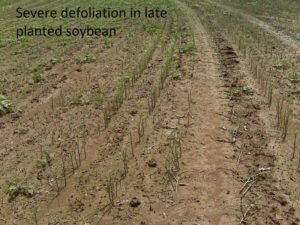 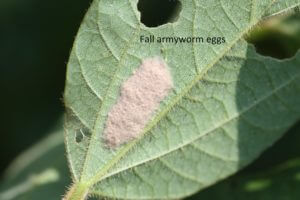 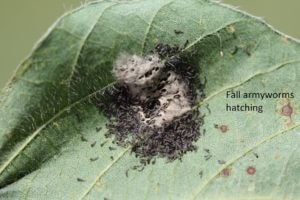 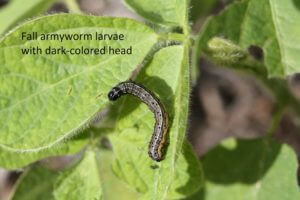 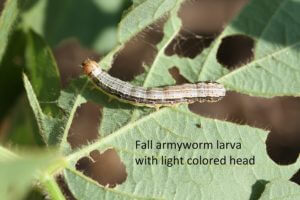 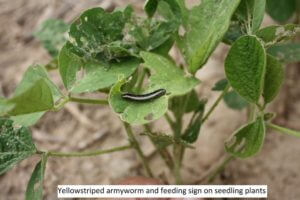 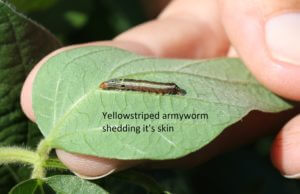 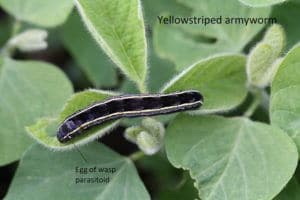