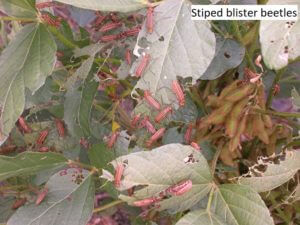 Blister beetles, Japanese beetles, and Mexican bean beetles are part of a defoliating beetle complex found in soybean that may also include bean leaf beetle, grape colaspis, and spotted cucumber beetle. Individually, these pests will seldom do enough leaf feeding to cause economic damage, but together or in combination with other defoliators, treatment is occasionally needed.

Blister beetles get their name from the defensive secretion, cantharidin, they secrete from the joints of their legs when disturbed, which can cause burning and blistering of the skin. Adults are soft-bodied beetles. Their appearance varies based on species, but adults are roughly 2 cm (3/4 inch) in length. The striped blister beetle has alternating dark brown and yellow stripes along the length of the body. The margined blister beetle is black with a gray border along the margins of its wing covers. The prothorax of blister beetles, the area between the head and the wings, is narrower than the head and the wings. Larvae are grub-like and found in the soil. Adults of both species, and especially the striped blister beetle, feed in clusters and skeletonize soybean leaves, making large and irregular holes between the leaf veins. Some soybean varieties are more preferred by blister beetles than others. Feeding is typically localized to a few small areas of the field, and often times, blister beetles will leave a soybean field as quickly as they arrived.

Japanese beetles can be a pest of gardens, trees, ornamental plants, and agricultural fields. Adults have a bright metallic green head and thorax with copper colored elytra (hardened wings) and a row of five spots of white hairs on each side of the abdomen below the wings. They are oval shaped and vary in length from 8 – 11 mm (3/8 – 1/2 inch) and a width of 5 – 7 mm (1/4 inch). Larvae or “white grubs” are found in the soil and do not cause economic damage in soybean. Japanese beetles have one generation per year in Tennessee. Adults typically emerge from late May through July and often feed in small clusters. Japanese beetles primarily feed on the upper foliage of soybean, consuming leaf tissue between veins and leaving a lace-like skeleton.

Mexican bean beetles belong to the same family of insects as the lady beetles. Adults are copper colored with 16 black spots on its back. Larvae are yellow to brown with many spines on the back and sides. Adults and full-grown larvae are about 6 mm long (1/4 inch), and both damage soybean by feeding on the undersides of leaves, resulting in a lacy skeletonized appearance. Mexican bean beetles rarely occur at economically damaging levels, and this primarily occurs in the central and eastern parts of Tennessee.

Sweep-net sampling and visual scouting can be used to determine which insects are causing defoliation in soybean fields. This may include beetles, caterpillars, grasshoppers, and other insects. Visually estimate percent defoliation at each sampling point. 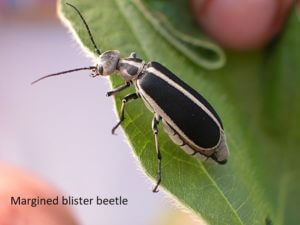 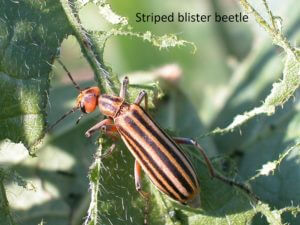 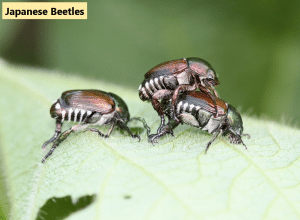 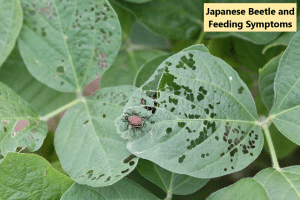 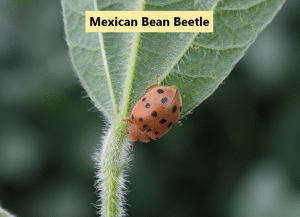